The highly anticipated “Botticelli and the Renaissance” exhibition, on loan from the Uffizi Gallery, one of the most visited museums in the world, will be unveiled in April at the Shanghai Bund One Art Museum.

The exhibition is one of 10 from the Uffizi collection to be presented in Shanghai over the next five years, thanks to a collaboration between the Uffizi Gallery and Shanghai Tix Media.

A total of 50 works will be exhibited to highlight the beauty of the work of Sandro Botticelli (1445-1510) and his contemporaries.

Schmidt, who has served as Uffizi director since 2015, previously served as director of the sculpture, decorative arts and textiles department at the Minneapolis Institute of Art from 2009 to 2015, when he developed a Jewish art sub-department. He also worked as a curator at the J. Paul Getty Museum in Los Angeles (2006-2008) and organized Diafane Passioni on Baroque sculpture at the Palazzo Pitti in Florence in 2013.

What is the biggest challenge of bringing 10 Uffizi Gallery exhibitions to Shanghai?

The continued presence of the Uffizi in Shanghai for the next five years is strategic for the direct knowledge of our collections – rich, different and unique – as well as of Italy itself in China. The challenge will be to explore and present to the Chinese public the immensity of the collections of the Galleries of the Offices. Ours is a collection like no other in the world, formed over almost half a millennium, but it is also a living entity, because each year the museum adds works to its collection.

Why was Botticelli chosen for the inaugural exhibition?

Botticelli is one of the most important artists of the Italian Renaissance, an integral part of Florentine history, a reference artist of the Medici family and the heart of our museum’s collections. It seemed appropriate to start our major exhibitions in Shanghai with this truly iconic artist.

Have the themes and contents of the following exhibitions been confirmed?

We have already set up the first three exhibitions and will work with our partners for the other seven.

As we start with Botticelli, the second exhibition scheduled between September 2022 and January 2023 will present a selection from our collection of self-portraits, and certainly the most important, constantly built up for 350 years.

From March to July 2023, Shanghai will host the “Uffizi 18th Century Masterpieces”, classic works and expressions of the variety of 18th century schools, from Goya to Canaletto, a century in which Florence and Tuscany particularly prospered. .

Why did Uffizi choose Shanghai Tix Media as a partner?

Shanghai Tix Media was a good match for the Uffizi Gallery as it has excellent experience working with very reputable international museums. What made the difference in this case was the idea of ​​a continuous presence in China, which is a strategic objective of the Uffizi Gallery.

What do you see as the future for some of the world’s greatest museums?

We welcome long-term partnerships, which allow galleries to properly plan, organize and execute exhibitions of our collections and to show the enormous variety of these collections, rather than individual projects.

Pure digital probably won’t be the future of museums, but it will certainly be a useful educational and communication tool, offering a different kind of experience. Most people will still want to see the real works, rather than just screenings or journeys into the metaverse.

A number of museums are facing financial problems due to the pandemic. And the Uffizi Gallery?

The Uffizi Gallery has been affected like any other museum by the pandemic, as we have faced closures and stagnation in international tourism, which has drastically reduced the number of visitors. We received support from the Italian government and we were able to use the funds we had generated in previous years, which allowed us to continue working normally. We have also seen the overall number of visitors increase from last summer, with many European visitors, who have somewhat replaced those from other continents, who have not been able to travel to Italy during this period.

Please use three adjectives to describe the Uffizi exhibition in Shanghai!

Superb, like the masterpieces we bring; fascinating, for the incredible story behind each masterpiece; and beautiful, because that’s what art is. 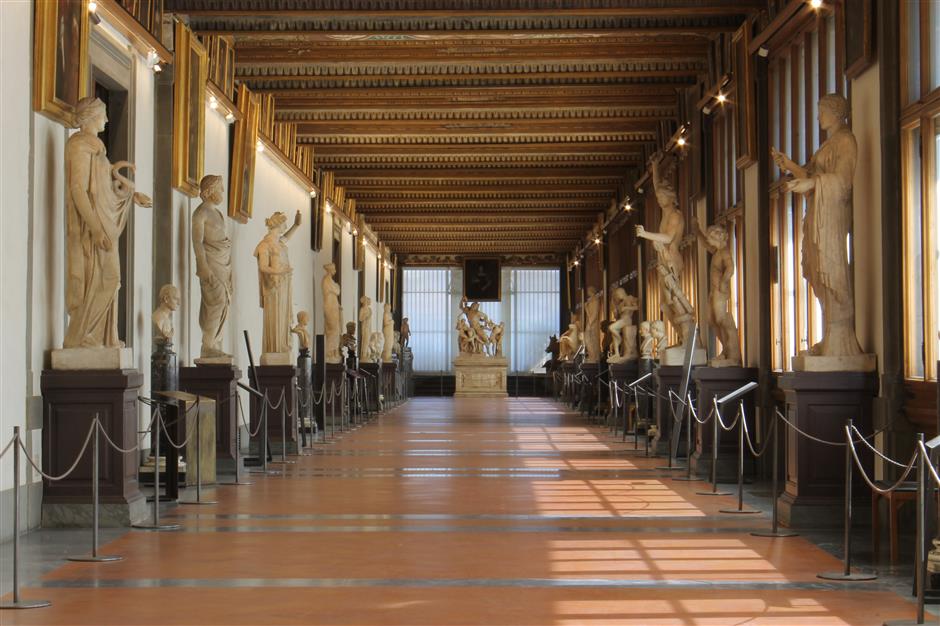 Located in the heart of Florence, the Uffizi Gallery houses works of art by great Italian artists such as Botticelli, Giotto, Cimabue and Michelangelo.