The 100 museums project kicks off with exhibits on imperial kilns

The Zhejiang Museum has launched a 100-museum project to reinvigorate the rich cultural heritage of the Song Dynasty (960-1279) in Zhejiang Province. The first stage was installed in a Southern Song imperial kiln museum in Hangzhou and includes interactive activities and 63 sets of antiques.

“Usually, a temporary exhibition only lasts three to six months. Now, we hope that the 100 museum project could last more than 10 years. Each city in Zhejiang Province has its own distinct Song Dynasty heritage that deserves further research and learning,” said Ji Yunfei. , deputy curator of the Zhejiang Museum.

The project begins with the Southern Song Imperial Kiln Museum, the first museum based on a millennial kiln in the country. It is a vital place where Song Dynasty porcelains are exhibited.

At that time, the royal court established the imperial kiln in Hangzhou to fire ceramics for the royal family. Their elegant shapes and jade textures were hallmarks of their manufacturing techniques, making Zhejiang an important center for the production of sought-after porcelain products in ancient China.

Except for top-notch Song Dynasty porcelains, the organizers also focus on the thoughts of scholars to show the open and inclusive society of the time.

The first-rate porcelains fired by the Southern Song imperial kiln are representative of Chinese ceramics of the 12th-13th centuries.

A millennium ago, woodcut technology accelerated the spread of literature and knowledge, as evidenced here by the ancient books on display spanning literature, religion, technology and agriculture.

Hangzhou’s booming printing industry and status as a capital have made it a mecca for scholars and scholars. Population growth and a prosperous economy, along with widespread social awareness, led to a flourishing Hangzhou during the Southern Song Dynasty (1127-1279).

Prosperity also changed the lives of women during the period. Throughout feudal dynasties, women were forbidden to attend school, and illiterate women were often considered to have better morals. However, open-minded Song dynasty families made great strides, allowing their daughters and wives to study literature, calligraphy, and painting.

A group of cultured women began to realize their self-esteem through the arts and improved their social status by improving their literacy, including Li Qingzhao, Lin Youyu, and Wu Zhiduan.

The exhibition features ink paintings by female painters, through which visitors gain insight into the constraints on women’s spirituality and emotions. Their works are differentiated from those of men by subtle emotions, delicate strokes and elaborate layouts, all of which are now revered by modern connoisseurs.

Women were also allowed to attend keju (imperial examination), an examination reserved for men of previous dynasties. During the period, officials selected by their examination results became dominant in the bureaucracy, so keju was an opportunity to become a senior government official.

The openness and inclusiveness of the Song period was also embodied in the flourishing maritime trade.

The royal court even enacted a law to guide the industry, which would be the world’s first maritime trade law.

Official departments were established in Hangzhou, Wenzhou, Guangzhou and Quanzhou to send ambassadors and welcome diplomats from other countries. 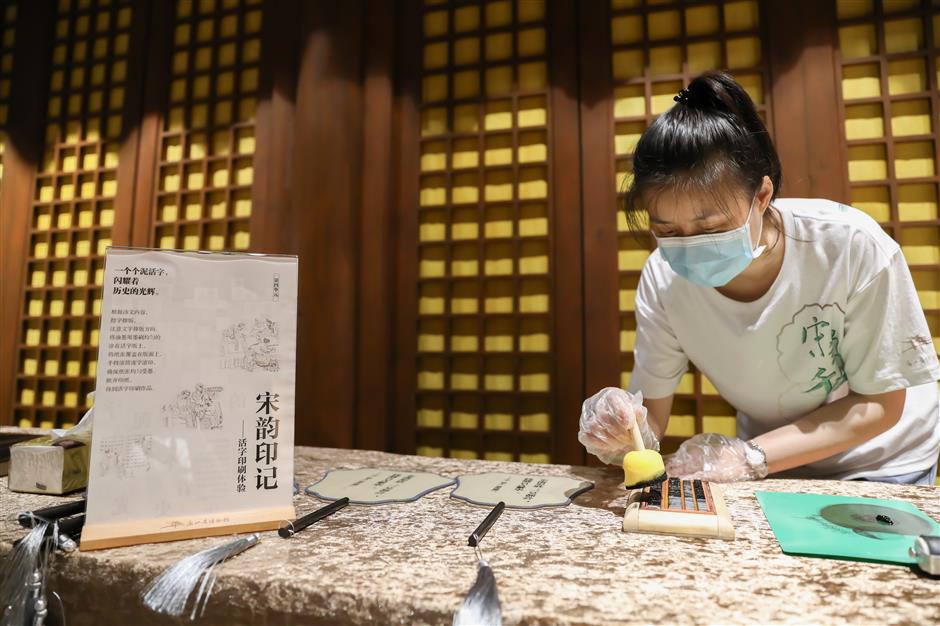 A museum staff member demonstrates how to do stone rubbing at the exhibit.

The 100 museum project aims to explore the art, economy, culture, agriculture and technology of the Song period and present a comprehensive picture of the heyday of ancient China to younger and emerging generations. .

In a bid to attract more teenagers, the Hangzhou Kiln Exhibition is designed with free interactive activities and lectures on Tuesdays, Thursdays, Saturdays and Sundays until August 31. Visitors must make a reservation as places are limited.

Visitors will be able to attend an authentic and entertaining puppet show, an arrow throwing game (touhu) and woodblock printing – activities that were popular among locals centuries ago.

“This exhibition not only displays ancient artworks, but also shows the way of life and aesthetics of our ancestors,” Ji said.

“Museums should play a role in educating the public. Exhibits and stories should be accessible to people. The 100 Museums Project will integrate the exhibit with education and spread the history of the Song Dynasty among people. younger generations.”

Exhibition of projects from 100 museums

Date: until September 21, closed on Mondays