The Duchess of Cambridge was tonight attending one of the most glittering events in her calendar so far this year – a gala dinner at the National Portrait Gallery.

She may have been surrounded by fashionistas such as Alexa Chung, but the Duchess more than held her own in a glamorous forest green floor length gown by Temperley London, one of her favourite designers.

Kate’s famously glossy brunette locks were styled in an especially bouncy flurry of curls, and she completed her outfit with a pretty gold glitter clutch bag costing £195 by Wilbur & Gussie and Jimmy Choo gold heels.

The royal was also sporting £8,900 green amethyst and pave diamond Candy earrings in 18ct yellow gold by Kiki McDonough, which complemented the colour of her dress.

Scroll down for video 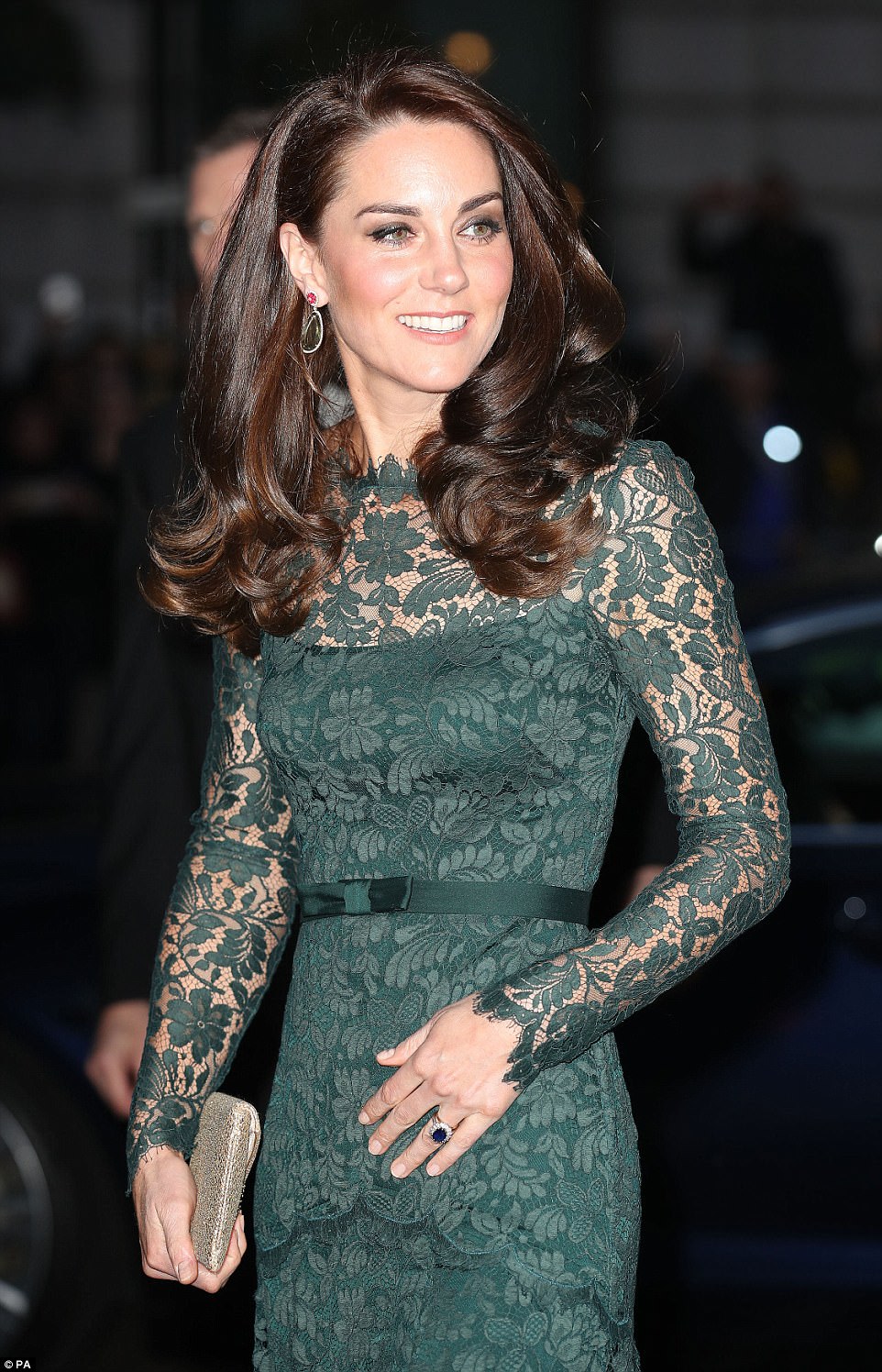 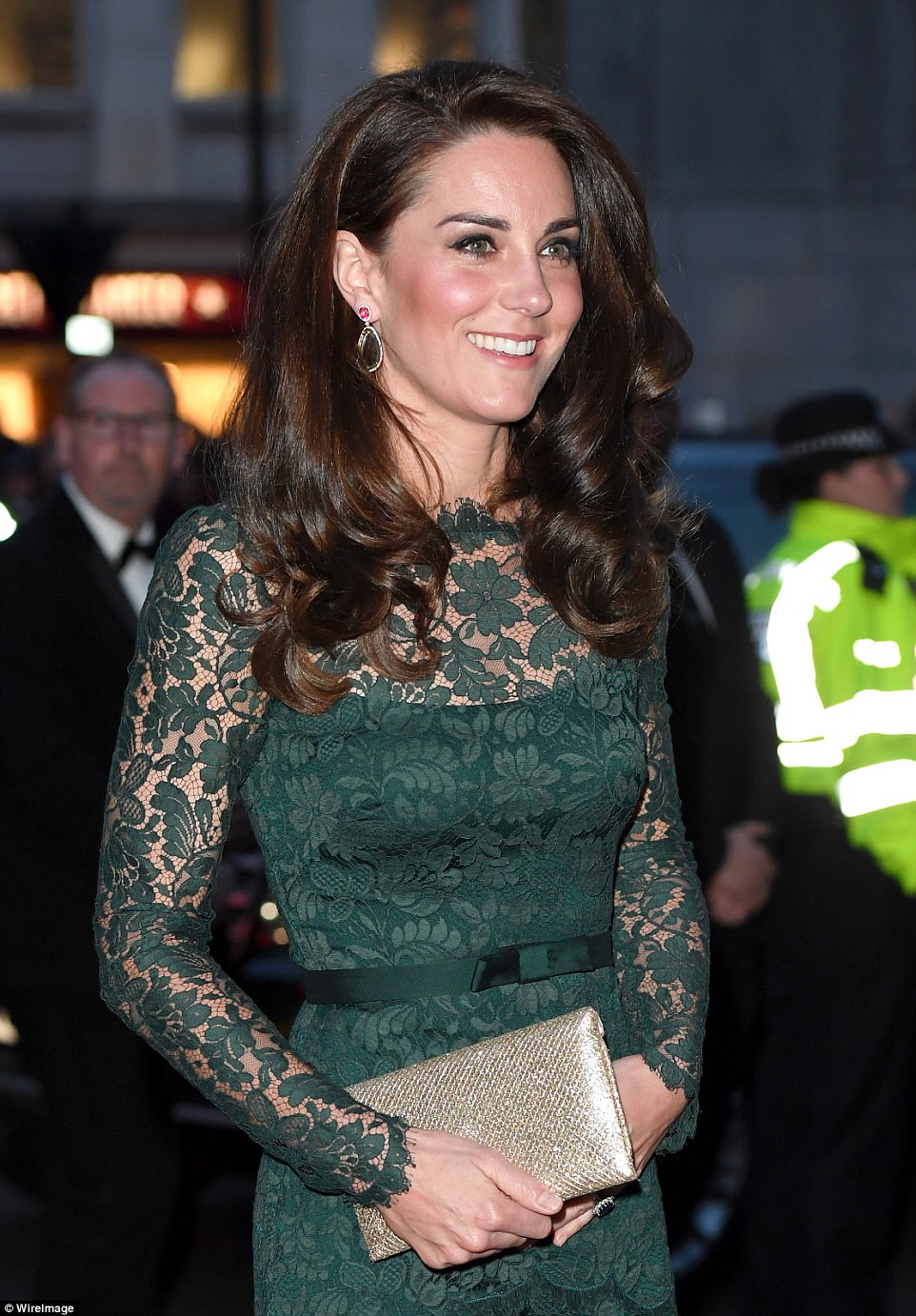 Kate was wearing a new pair of earrings by one of her favourite jewellery designers Kiki McDonough, which picked up the colour in her dress 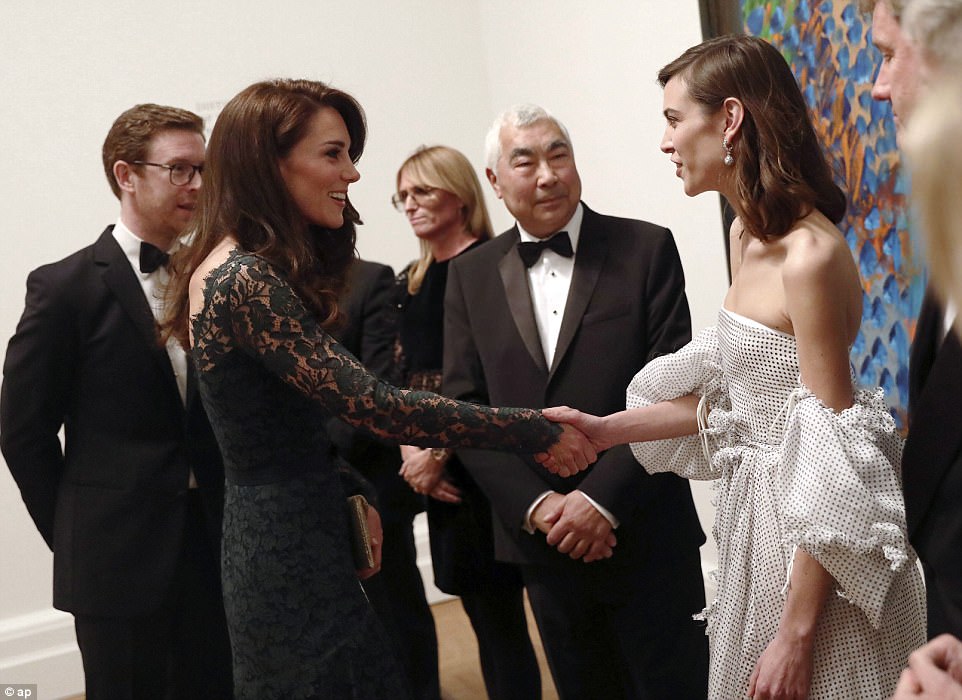 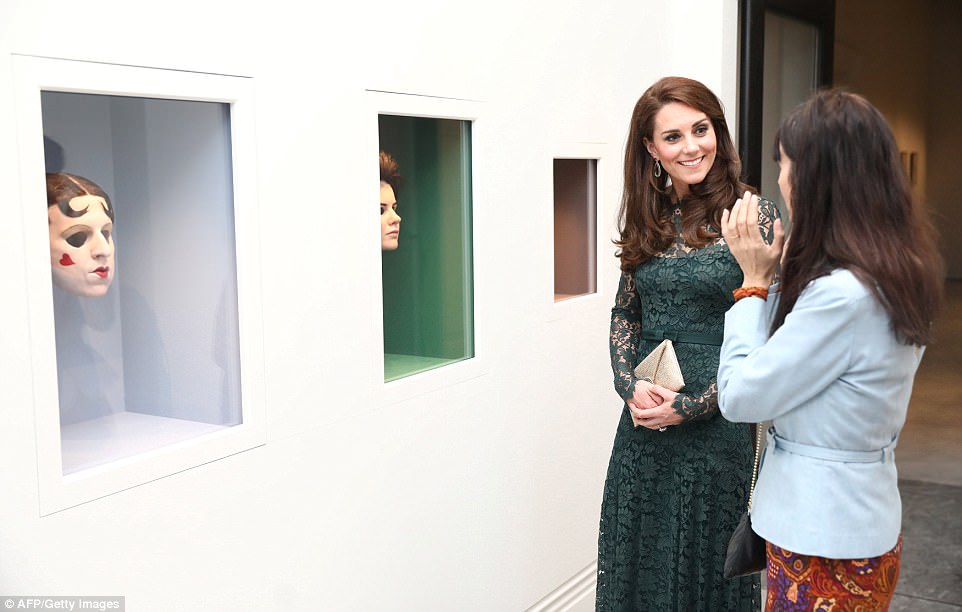 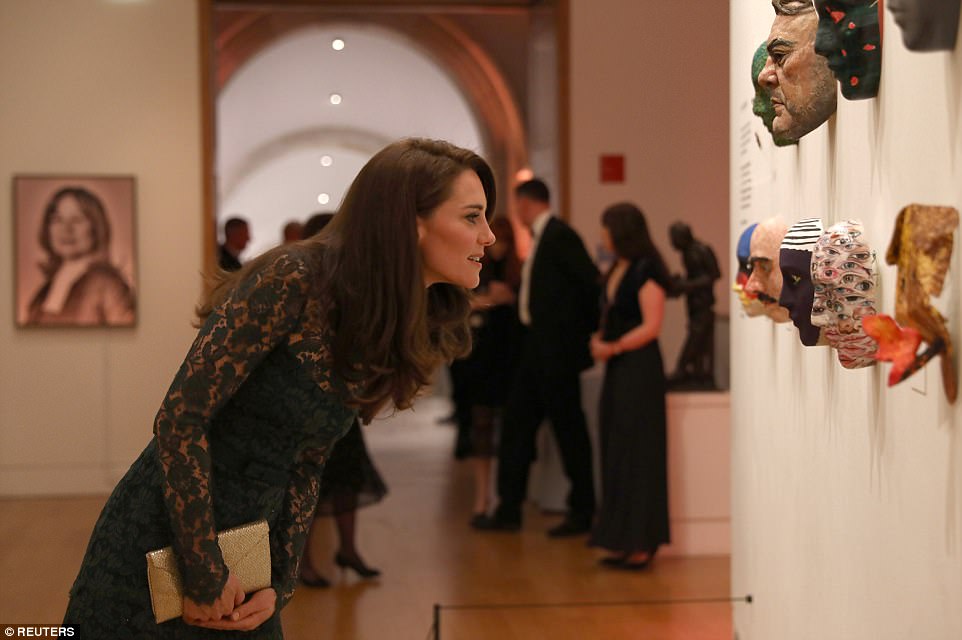 The former history of art student looked fascinated as she examined a display of masks, specially commissioned for the event 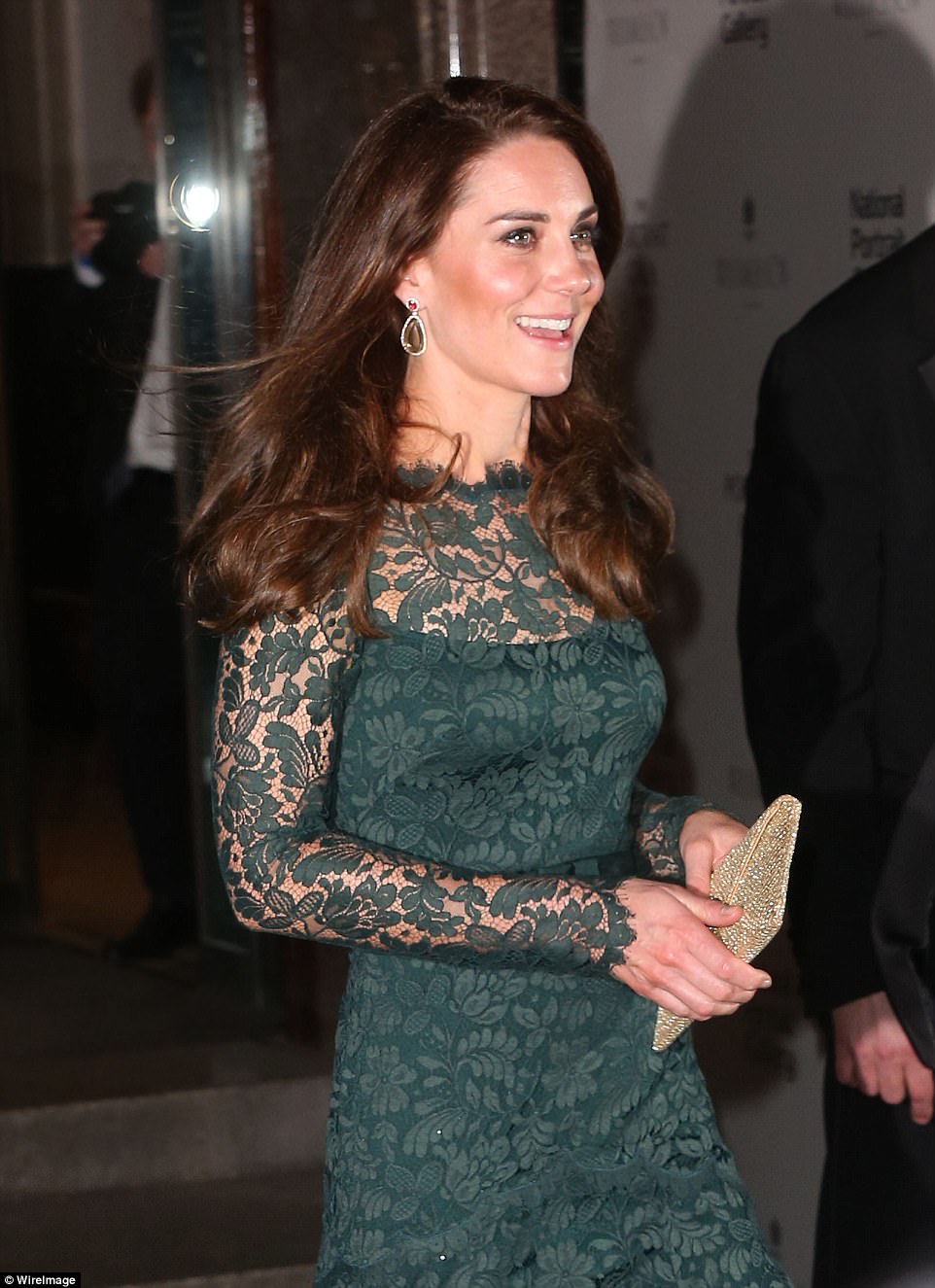 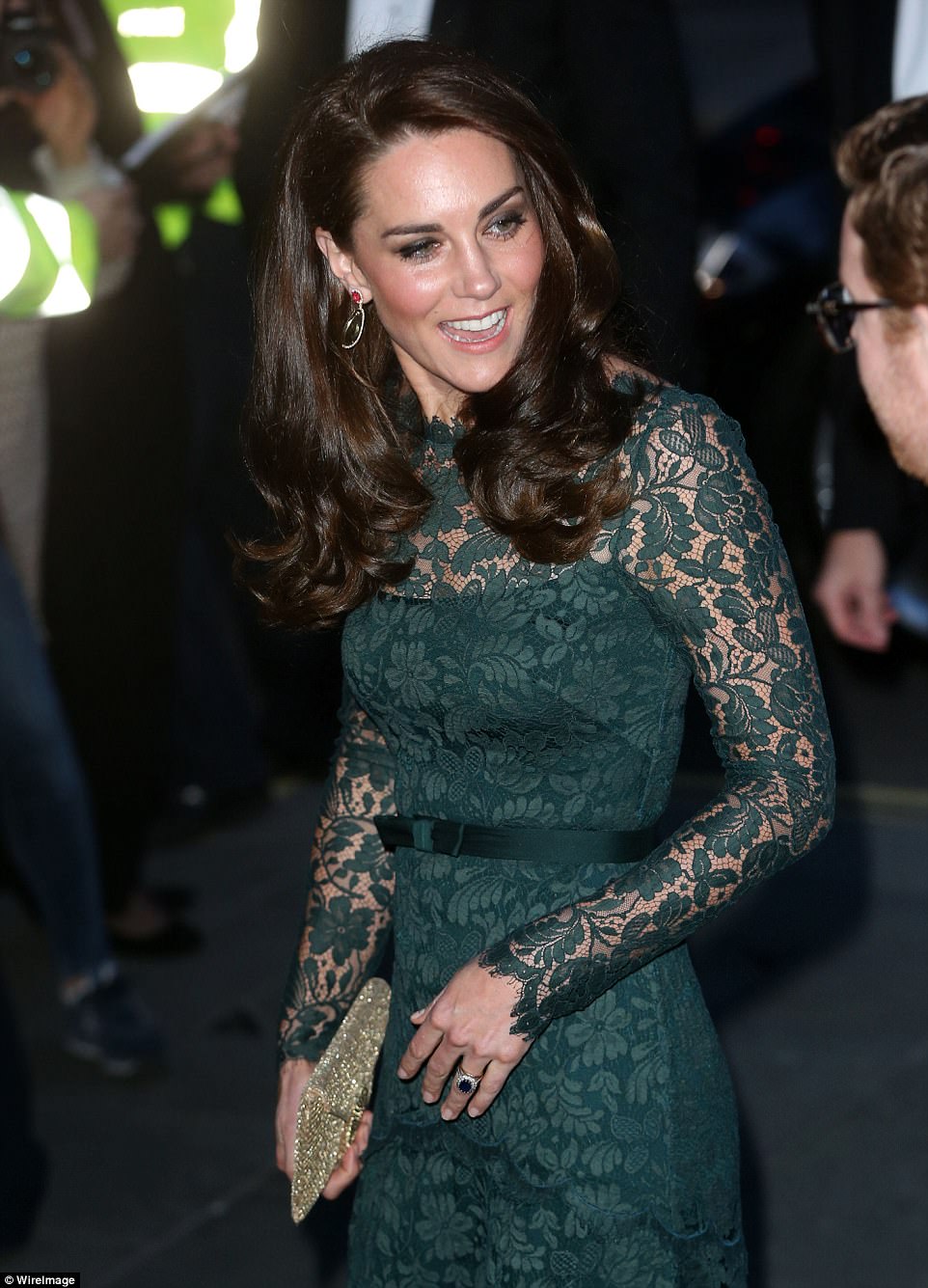 Kate, a former history of art student at St Andrew’s, was at the 2017 Portrait Gala in her role as patron of the gallery 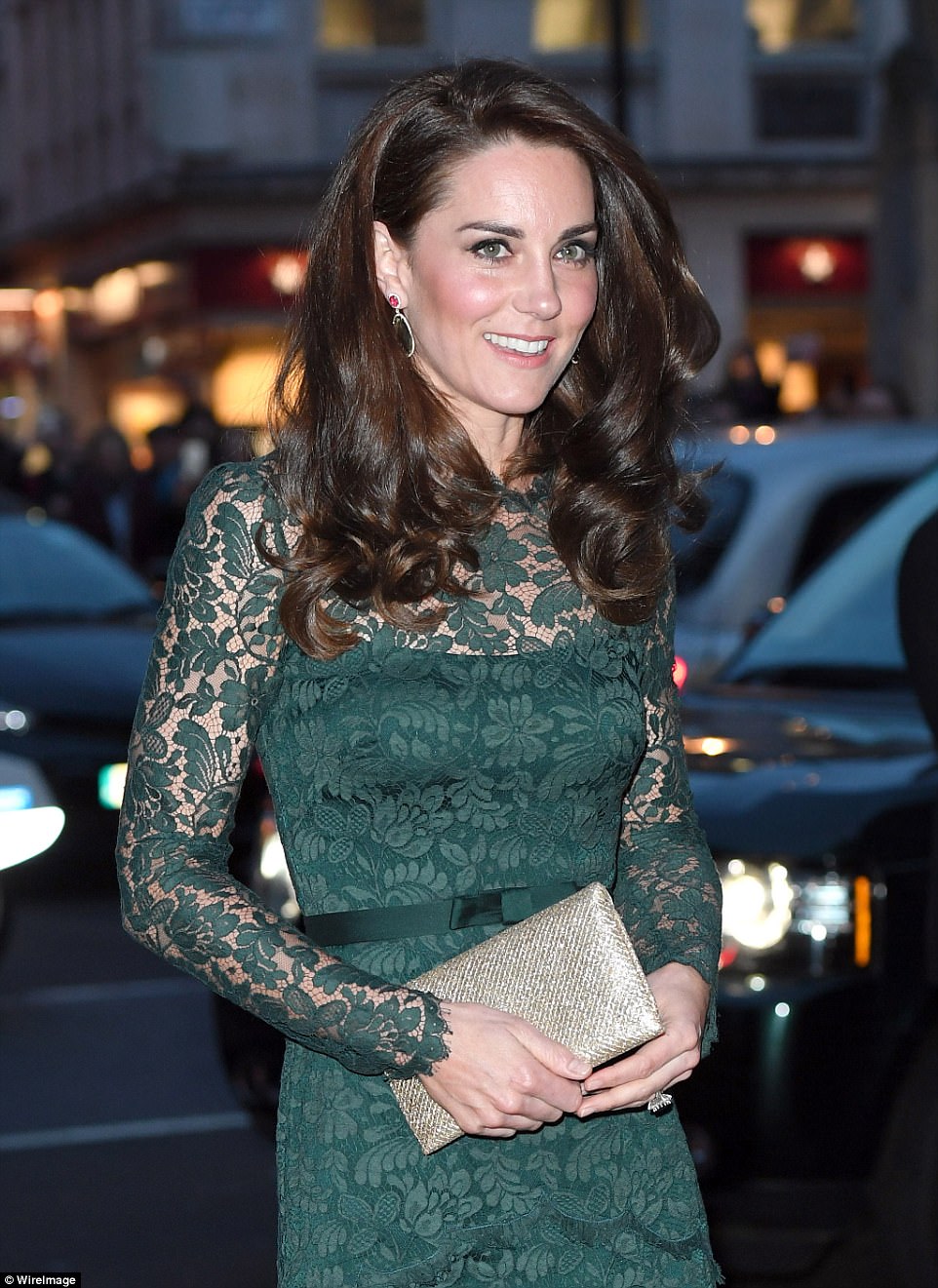 Kate, a former history of art student at St Andrew’s, was at the 2017 Portrait Gala in her role as patron of the gallery, and she met two potentially useful new acquaintances – fellow parents from Prince George’s new school.

She was introduced to Richard Found, who runs an architecture and design practice, and his wife Jane Suitor, an art consultant and collector, who revealed that their child was also at Thomas’s School in Battersea, where her son will be starting in September.

They told the Duchess it was a ‘great school’ and she said she hoped to see them at the school gates.

‘We were chatting about Thomas’, the school George will be going to,’ said Mr Found afterwards. 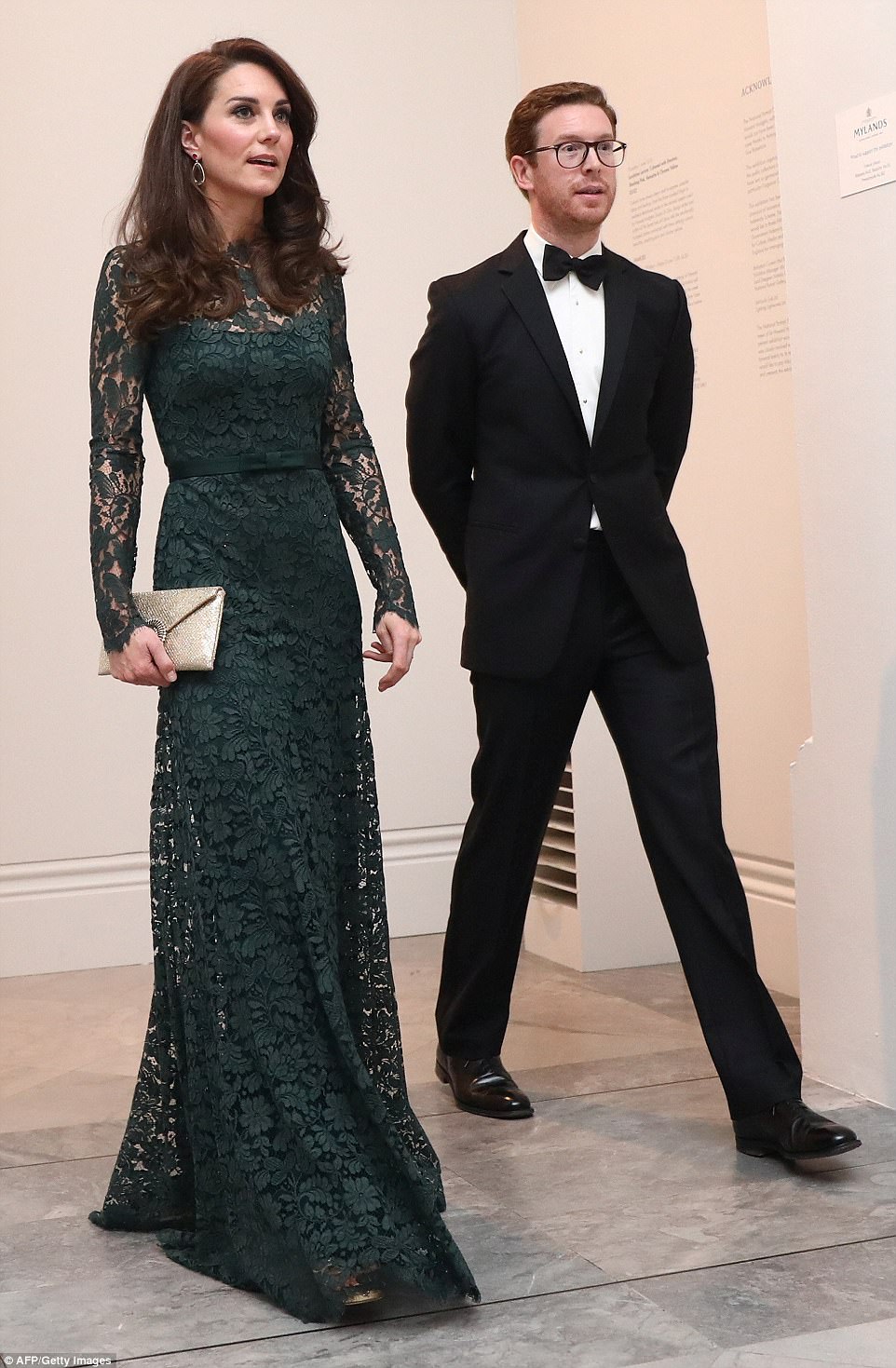 The Duchess of Cambridge walks with Nicholas Cullinan Director of the National Portrait Gallery, as she arrives to attend the 2017 Portrait Gala, 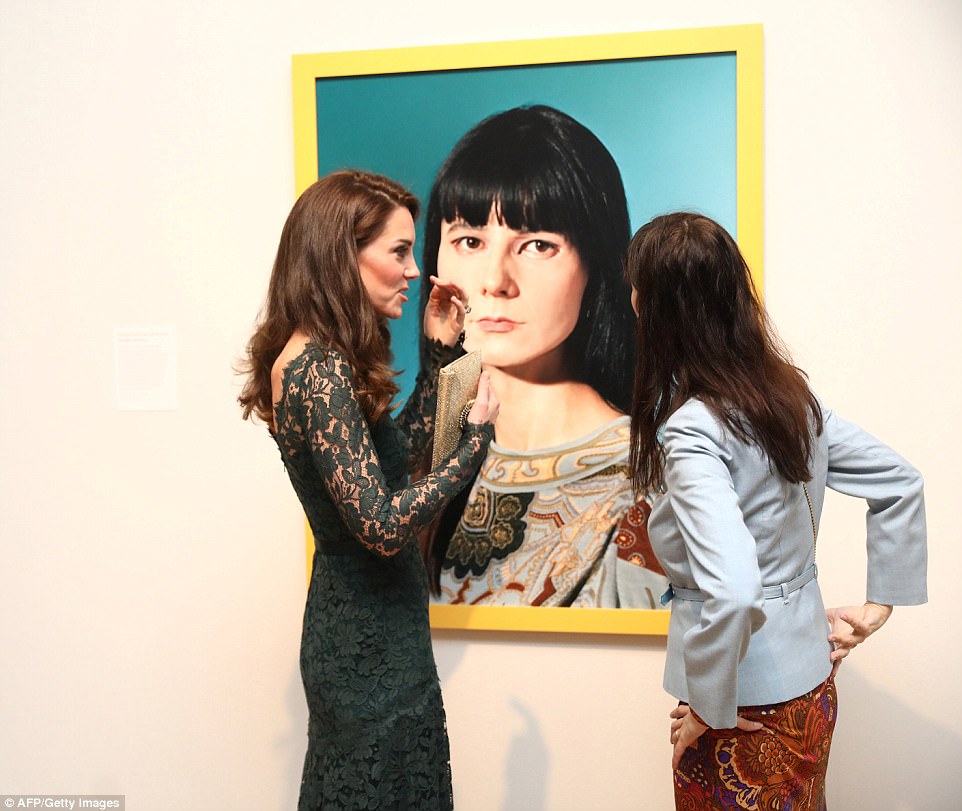 Kate engaged in an animated discussion with artist Gillian Wearing, who gave her a private tour 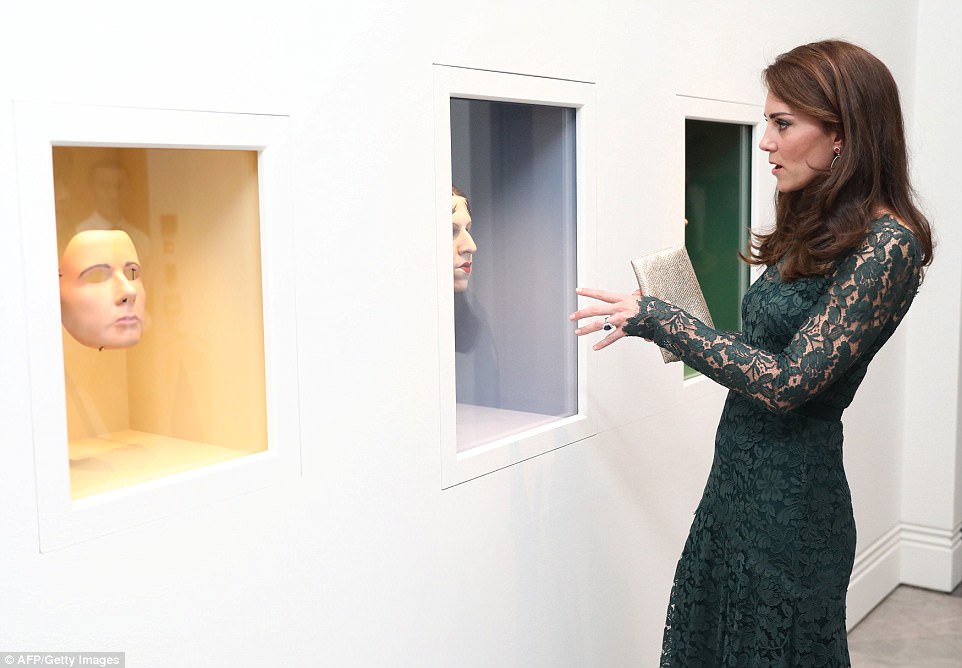 Kate, who has been patron of the National Portrait Gallery for five years, views works by artist Gillian Wearing 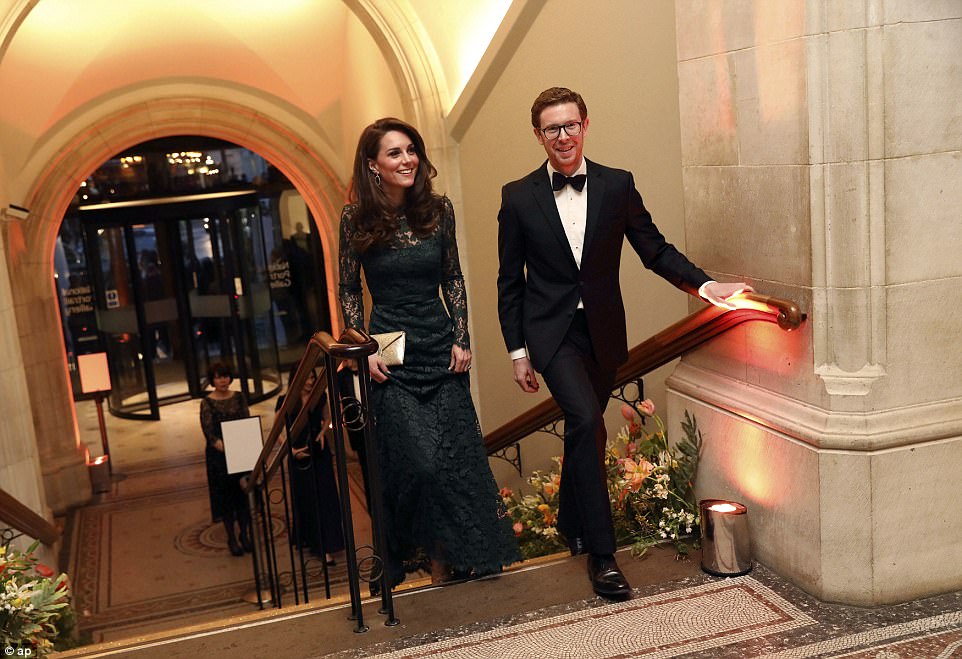 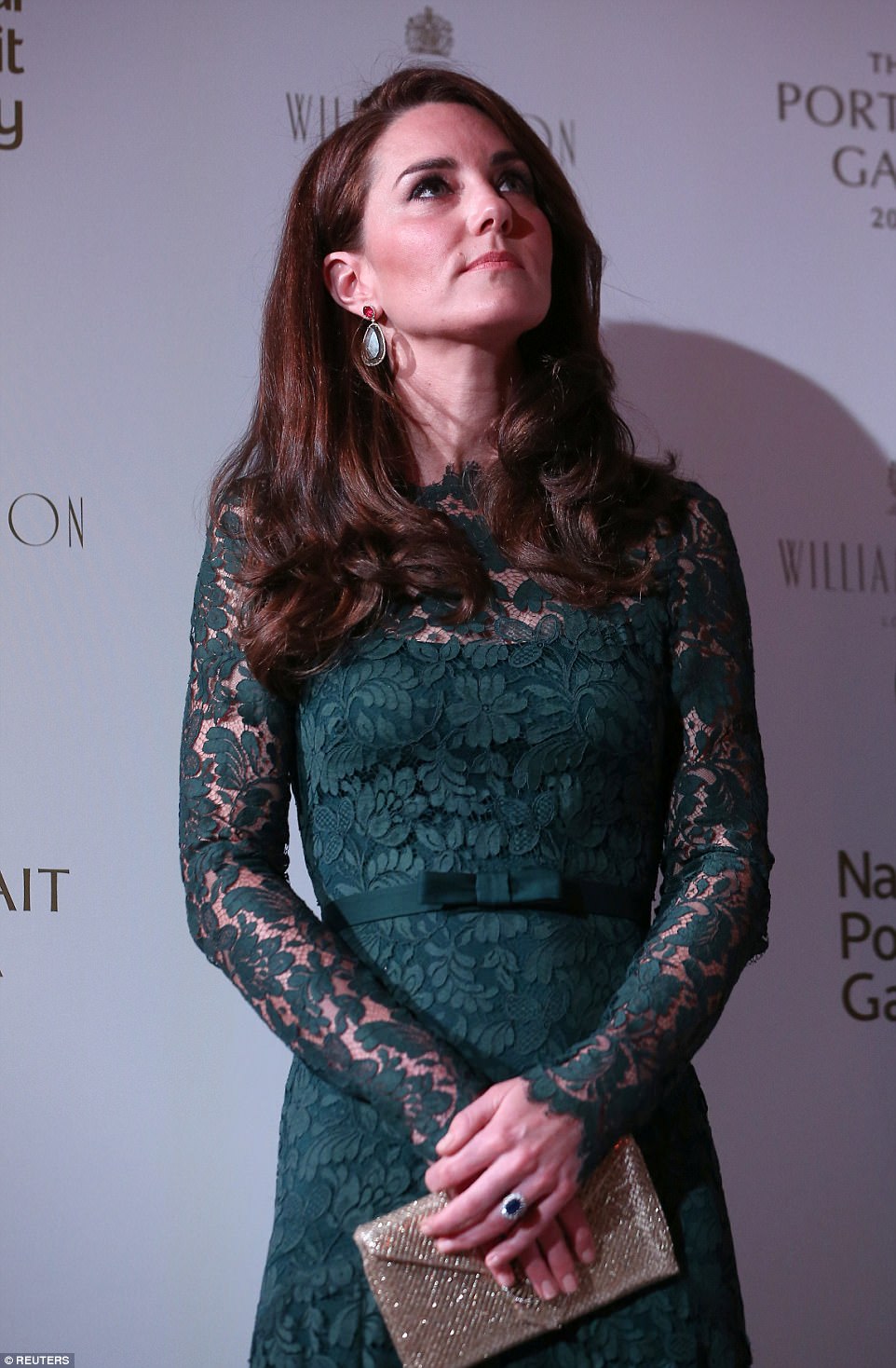 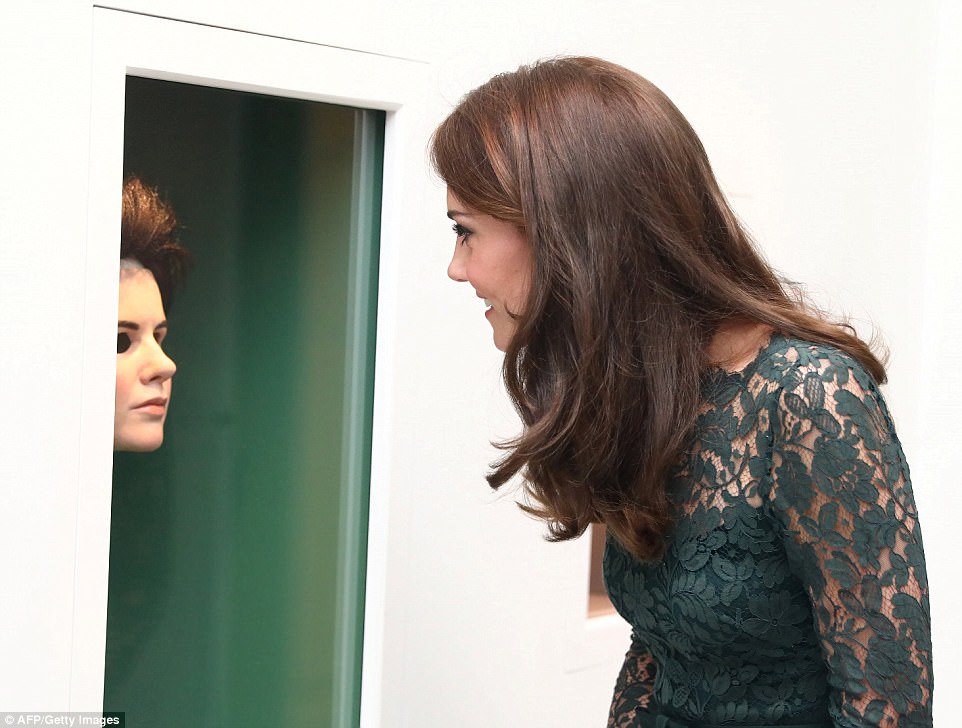 ‘We’re parents there as well. She just said “I may see you at the school gates”.’

She went on to speak to Phillip Chung, father of television presenter and model Alexa Chung, who remarked on the collection of art he had built up thanks to his children.

The Duchess told him that she too had begun gathering her own children’s artistic efforts together. 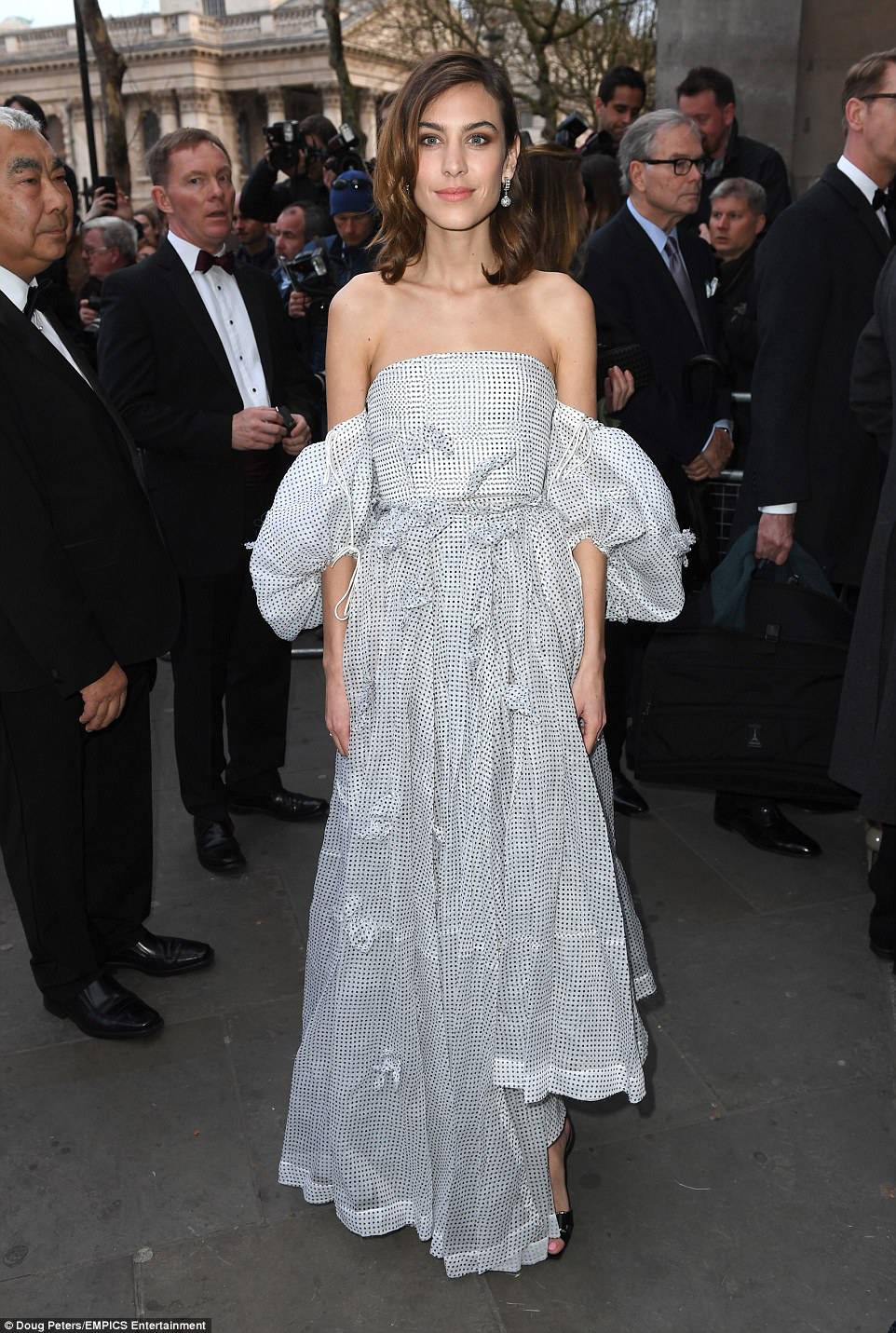 Alexa Chung looked captivating in an unusual voluminous, polka dot, off-the-shoulder dress as she arrived for the glittering gala 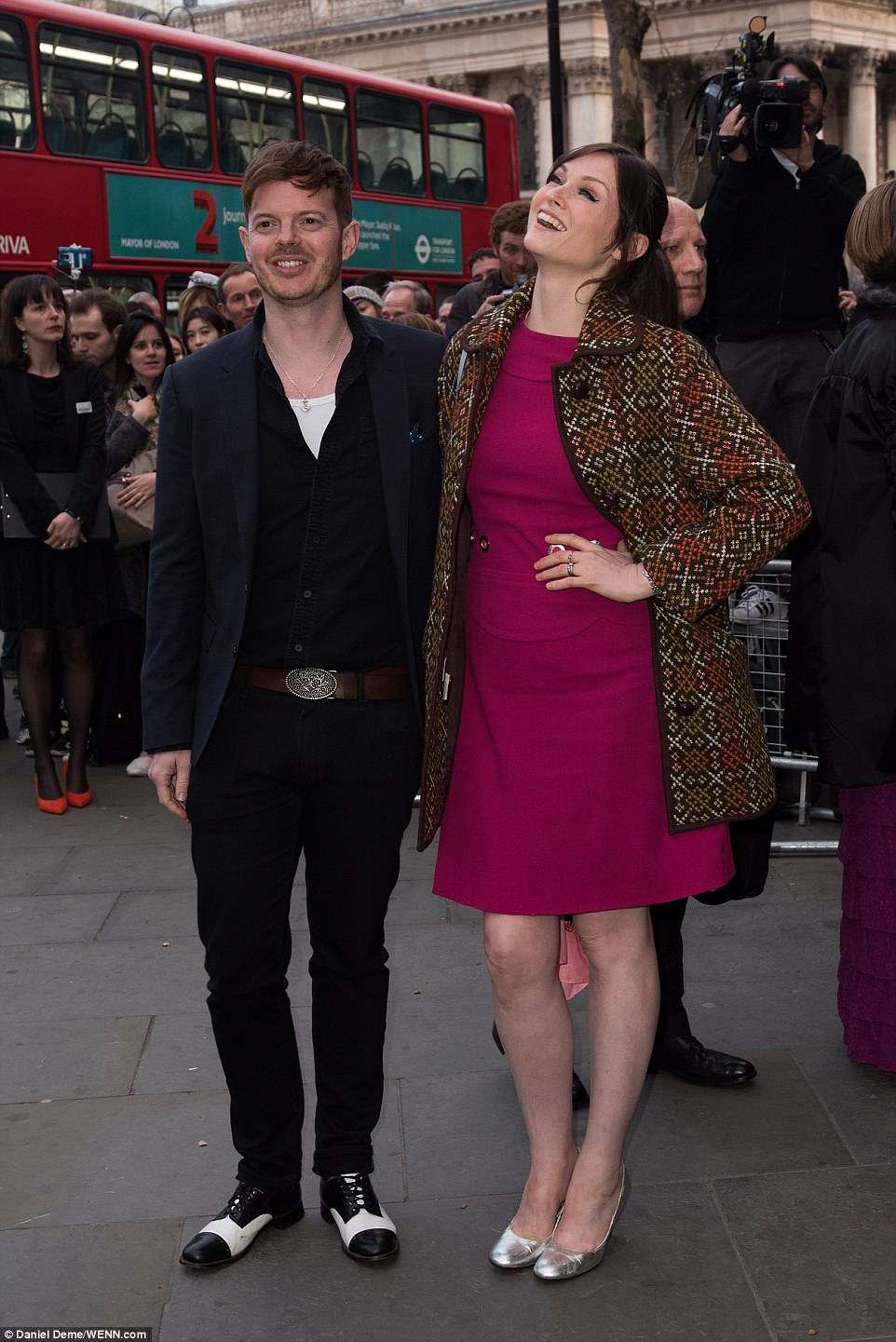 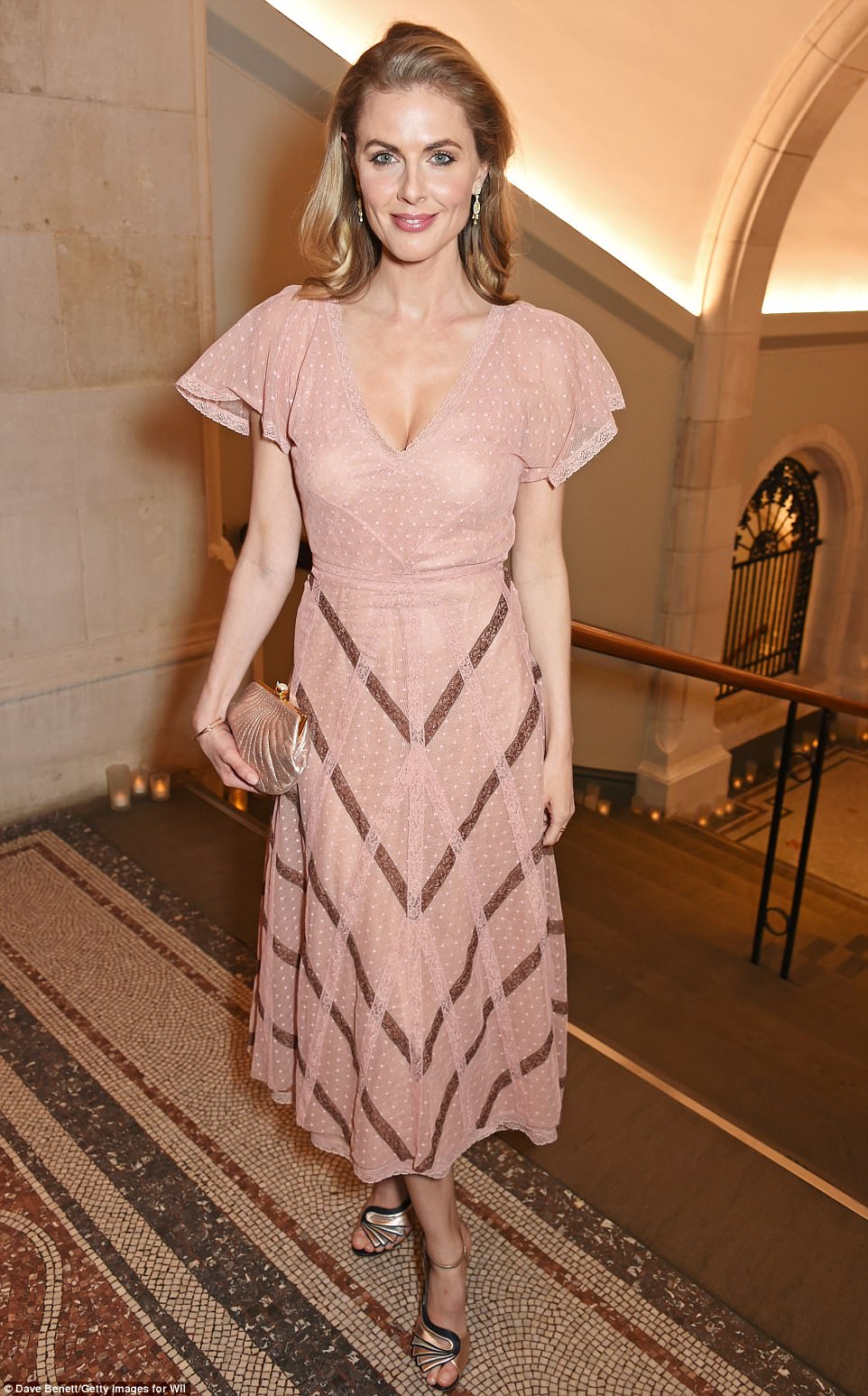 Donna Air, who is dating Kate’s younger brother James Middleton, was pretty as a picture in pink lace 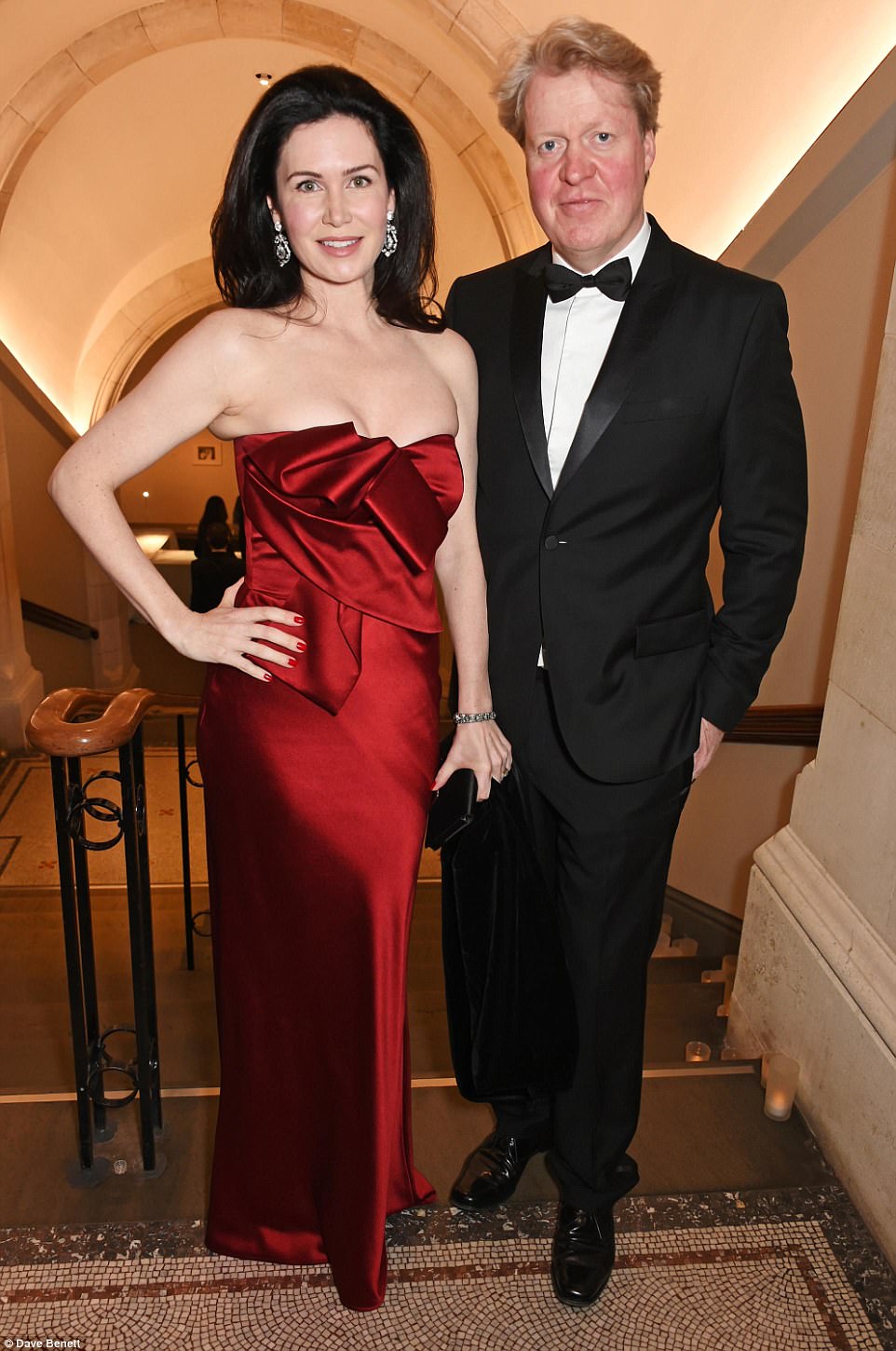 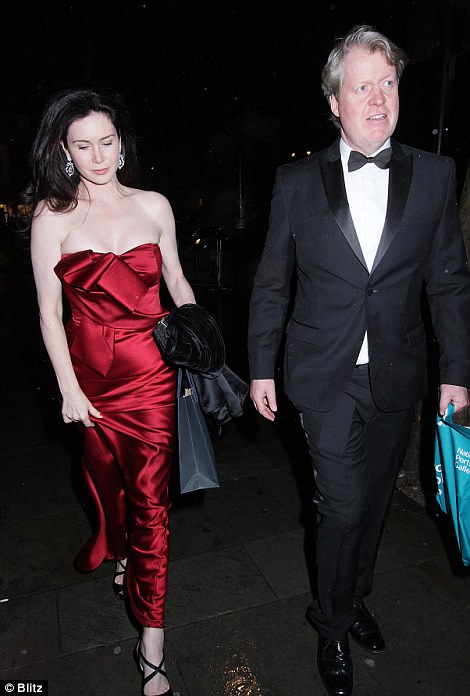 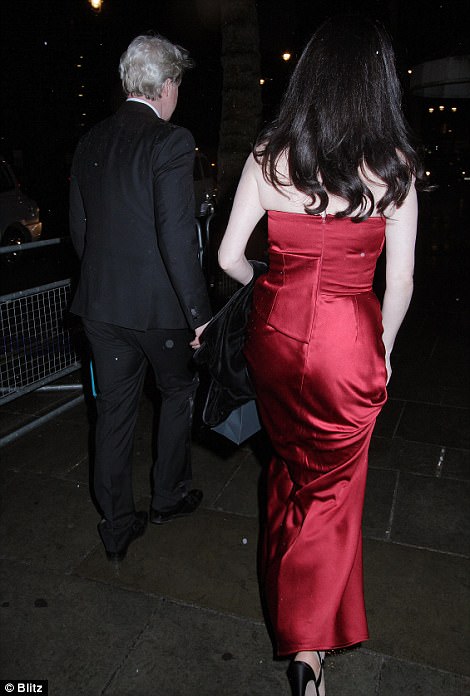 Countess Spencer chose a dramatic red dress for the star-studded event, which she teamed with strappy black heels 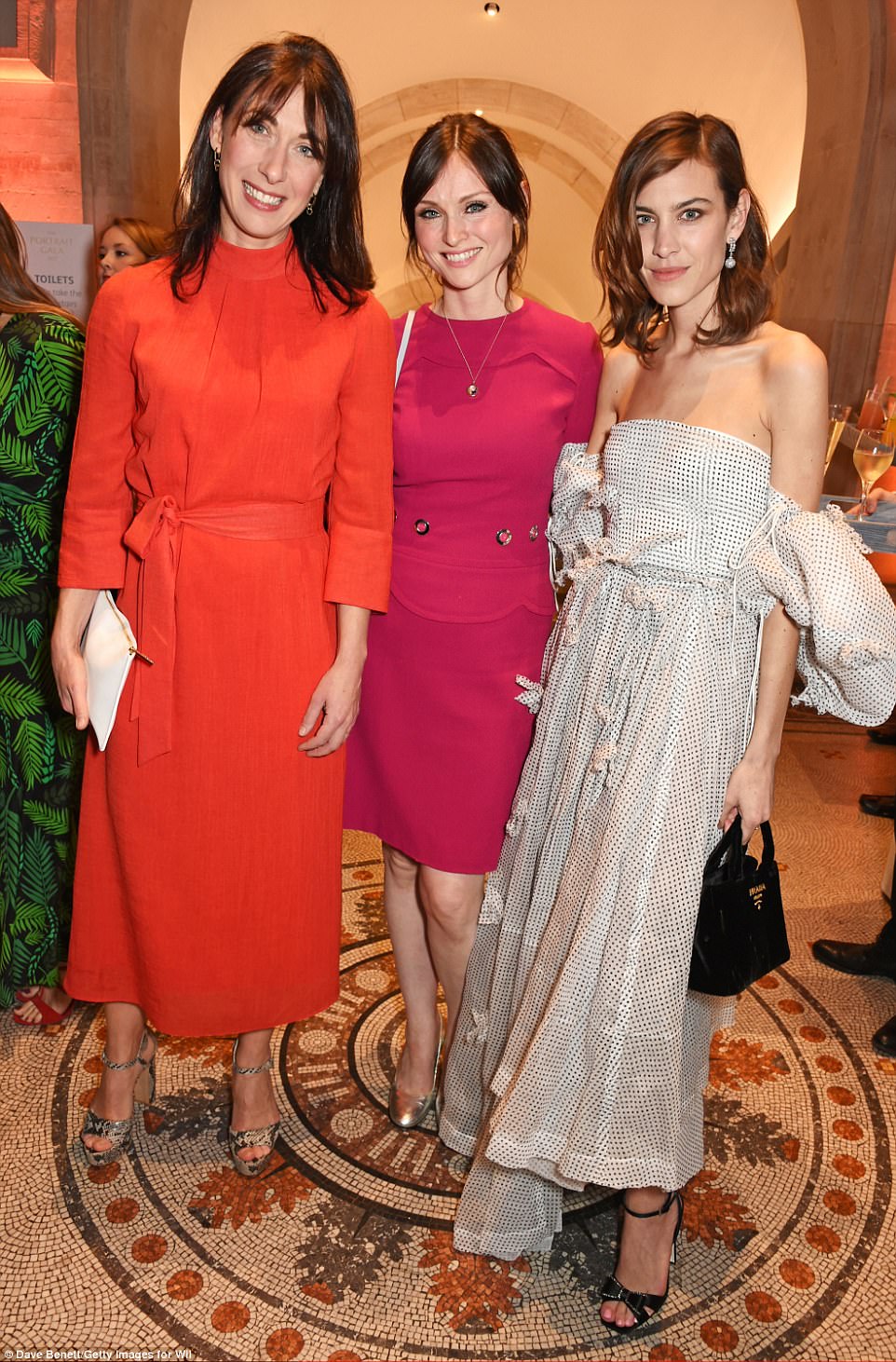 Greeted by Dr Nicholas Cullinan, the director of the NPG, on arrival, the Duchess was escorted up glittering golden stairs into a champagne reception.

There, she was shown around an exhibition by Howard Hodgkin, Absent Friends, including the last work he painted before he died.

She was then given a lengthy personal tour of Gillian Wearing and Claude Cahun: Behind the Mask, Another Mask, by the artist herself. 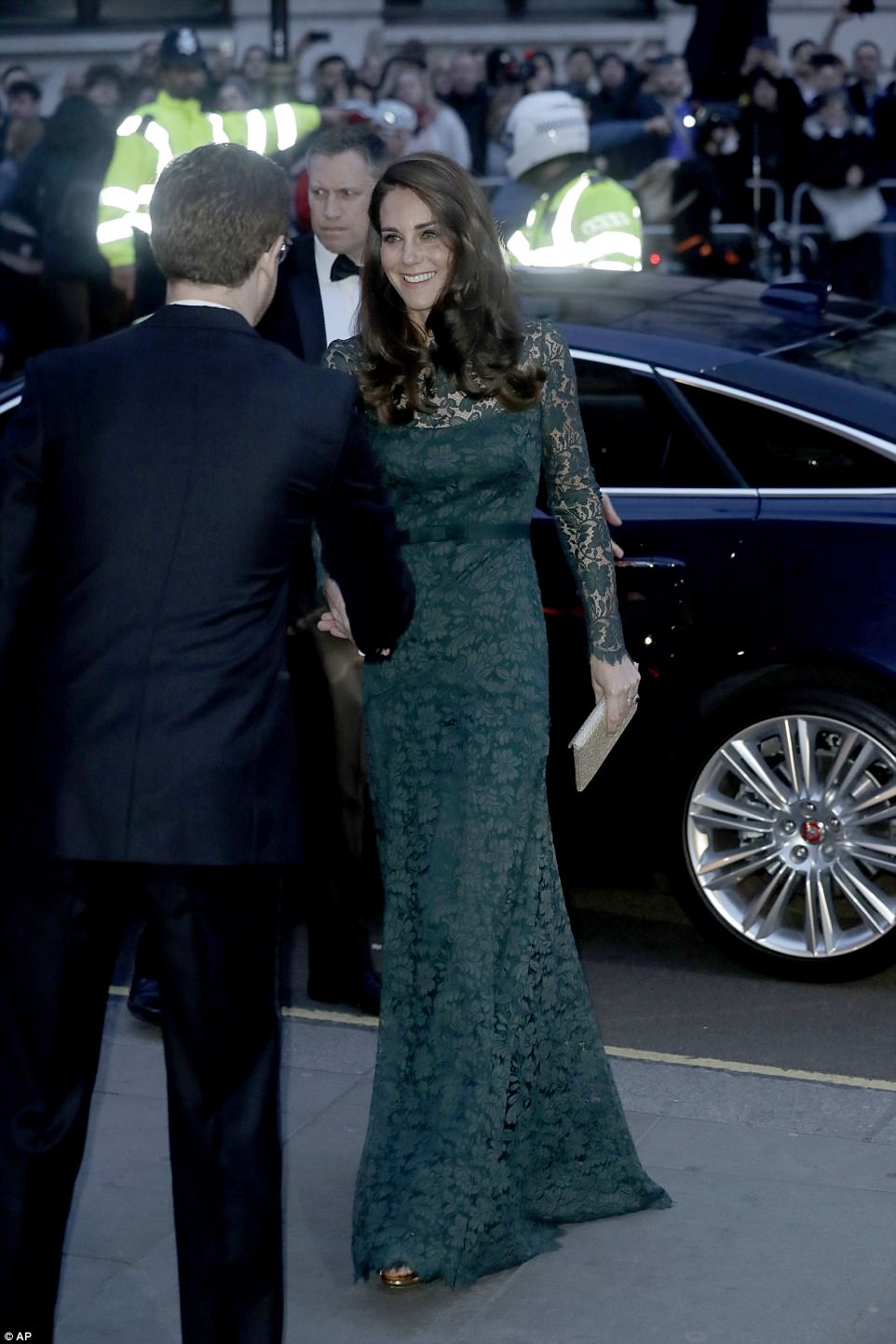 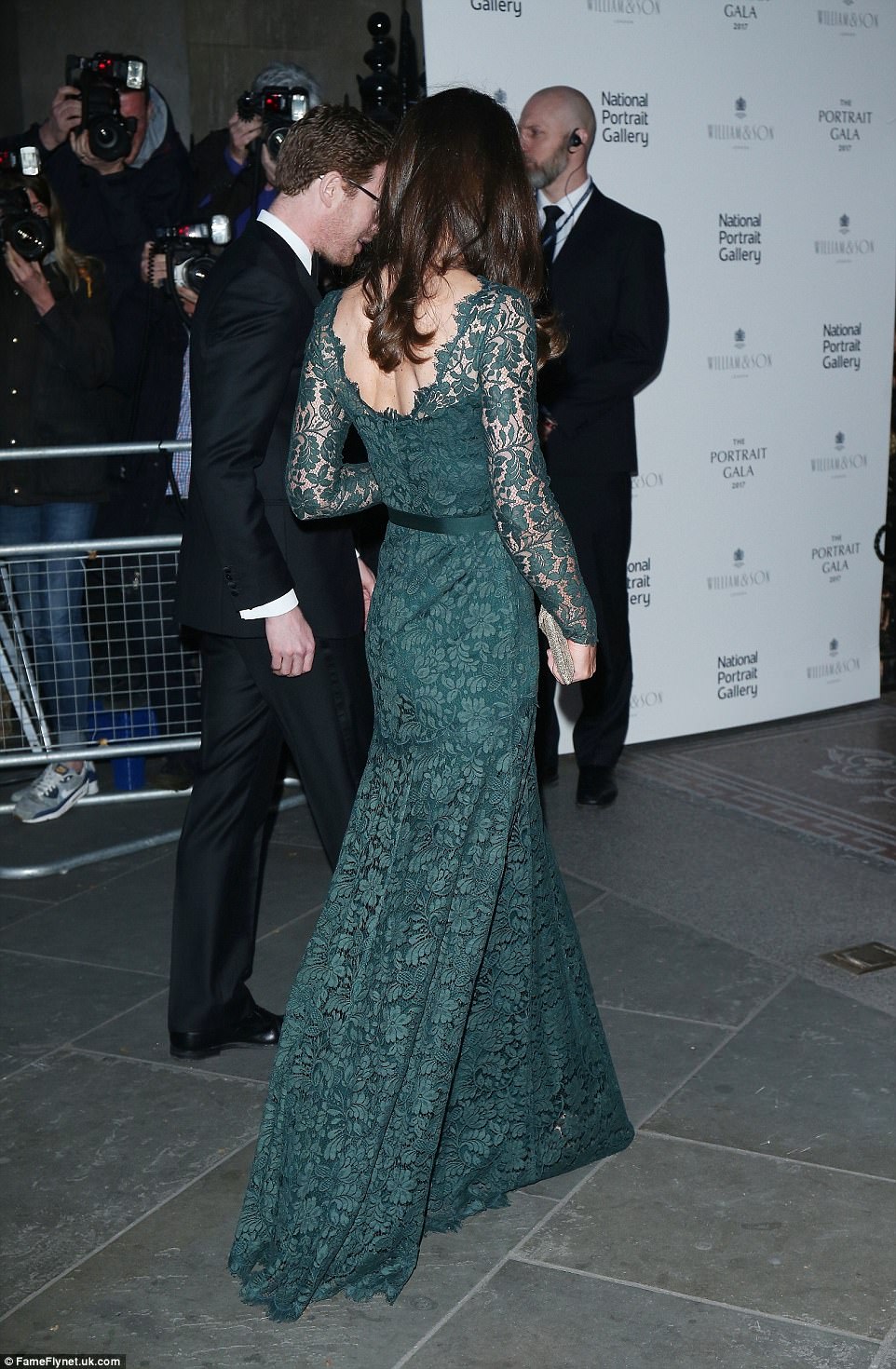 Kate’s dress featured a scalloped neckline at the back, which showed off a hint of her slim shoulders 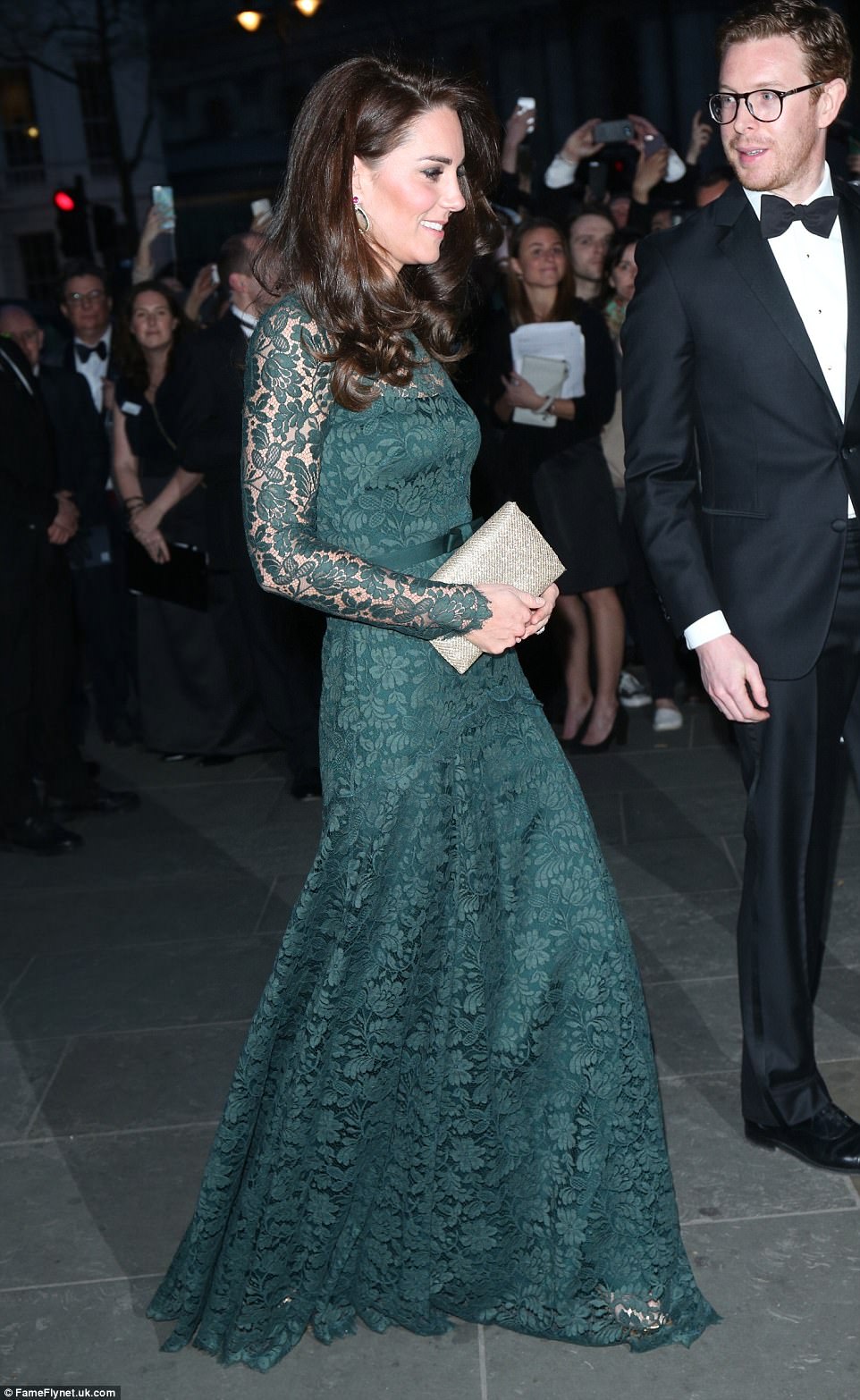 London gallery to catch a glimpse of the Duchess as she entered” class=”blkBorder img-share” style=”max-width:100%” />

Dr Cullinan made a speech to guests launching the NPG’s major fundraising project Coming Home, which aims to return works of art to the regions they are linked with on loan.

‘It could enable sitters such as Sir Francis Drake to return to Plymouth, the Bronte sisters or David Beckham to Essex,’ he said.

Moving upstairs, the Duchess was shown ten masks by artists including Philip Treacy, Maggie Hambling and Dame Vivienne Westwood, due to be sold for fundraising efforts.

A series of 100 new postcards, by famous artists who have anonymised their work, were also up for sale for £250. 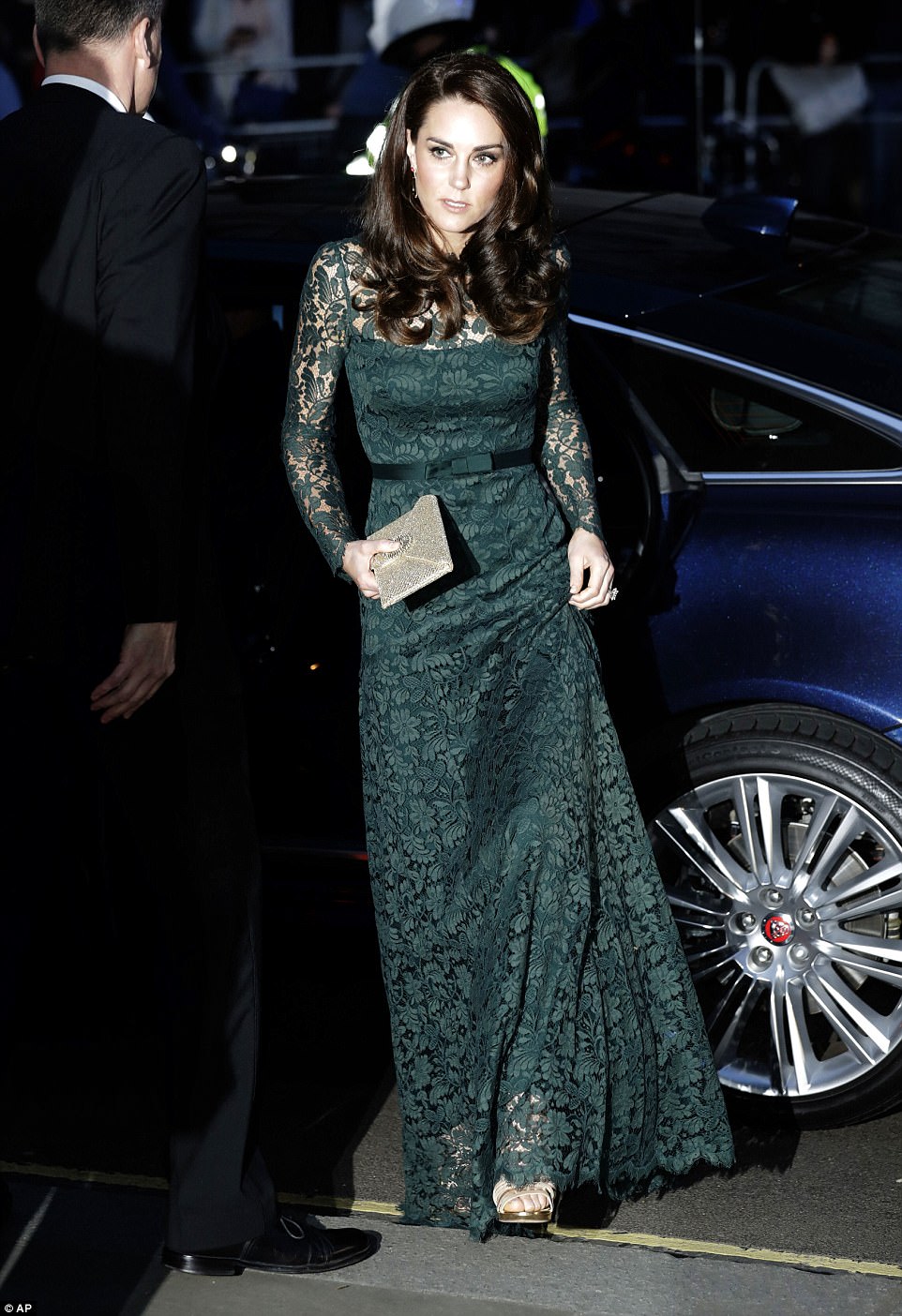 The Duchess had competition from a glamorous crowd, including model and muse Alexa Chung who looked striking in an unstructured polka dot dress with voluminous sleeves.

Also in attendance was Sophie Ellis Bextor who was channeling the ’60s in a brightly patterned coat and pink minidress.

Donna Air, who is the girlfriend of Kate’s brother James, was pretty as a picture in a delicate pink dress with a lace pattern.

Tonight’s engagement follows the news that the Duchess will make a solo visit to Luxembourg on 11 May to attend events celebrating the 1867 Treaty of London, at the request of the Foreign and Commonwealth Office. 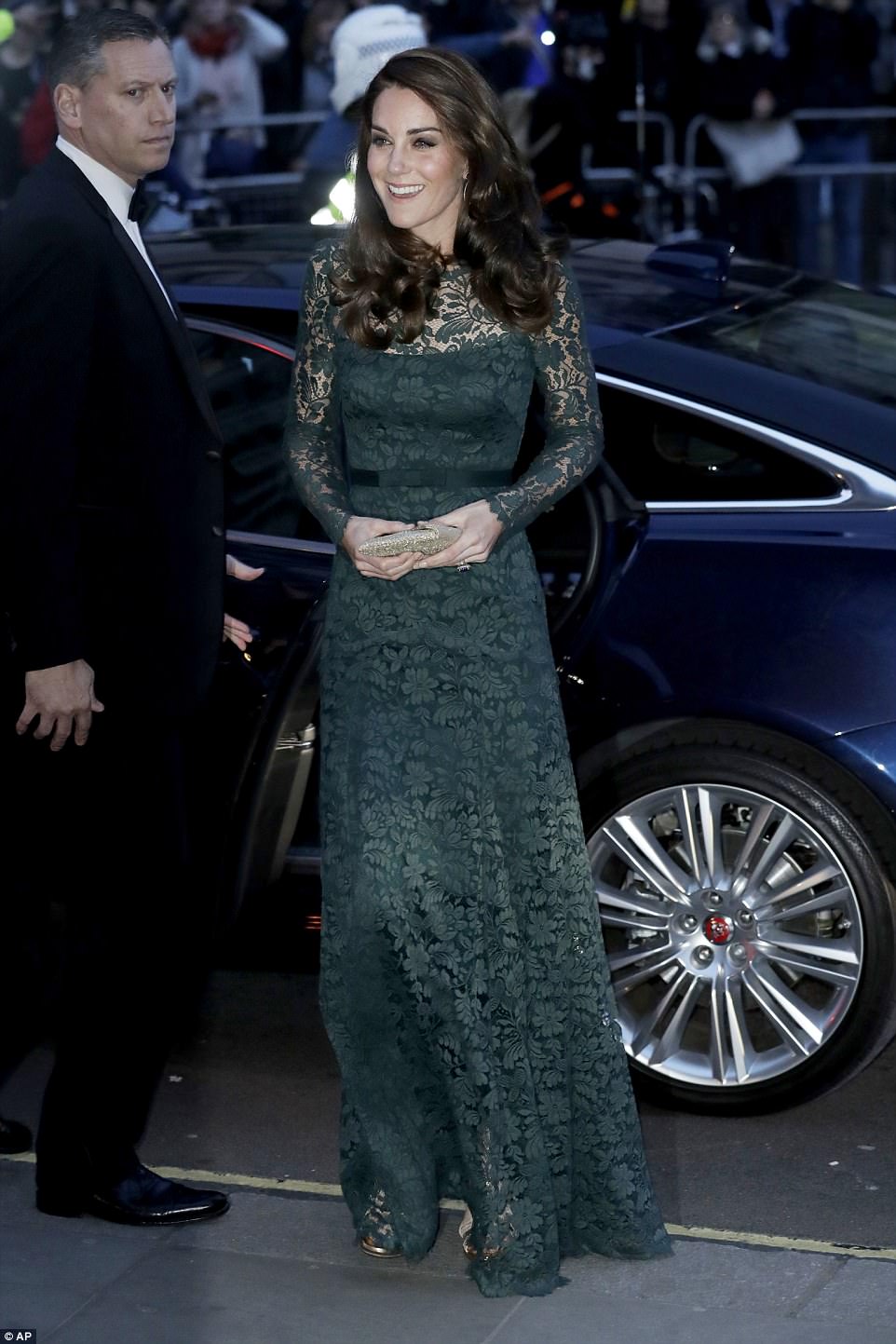 Former history of art student Kate was no doubt looking forward to the evening, where she had the opportunity to view two of the gallery’s latest exhibitions 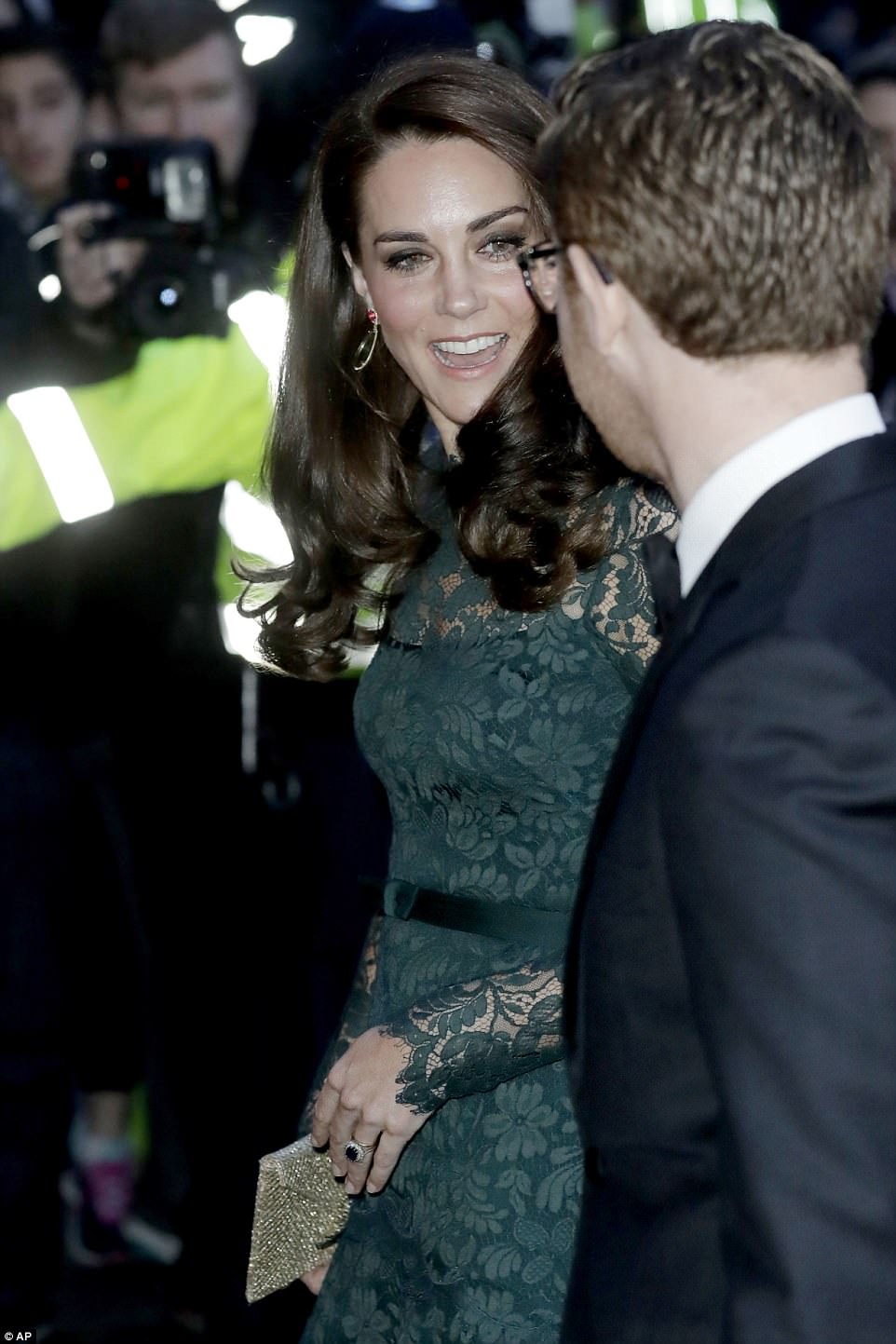 The Duchess was warmly welcomed by Dr Nicholas Cullinan, the director of the NPG, on arrival

The Duchess of Cambridge shows off her gold strappy Jimmy Choos as she departs The Portrait Gala fundraising dinner. Her gold heels matched her metallic clutch bag 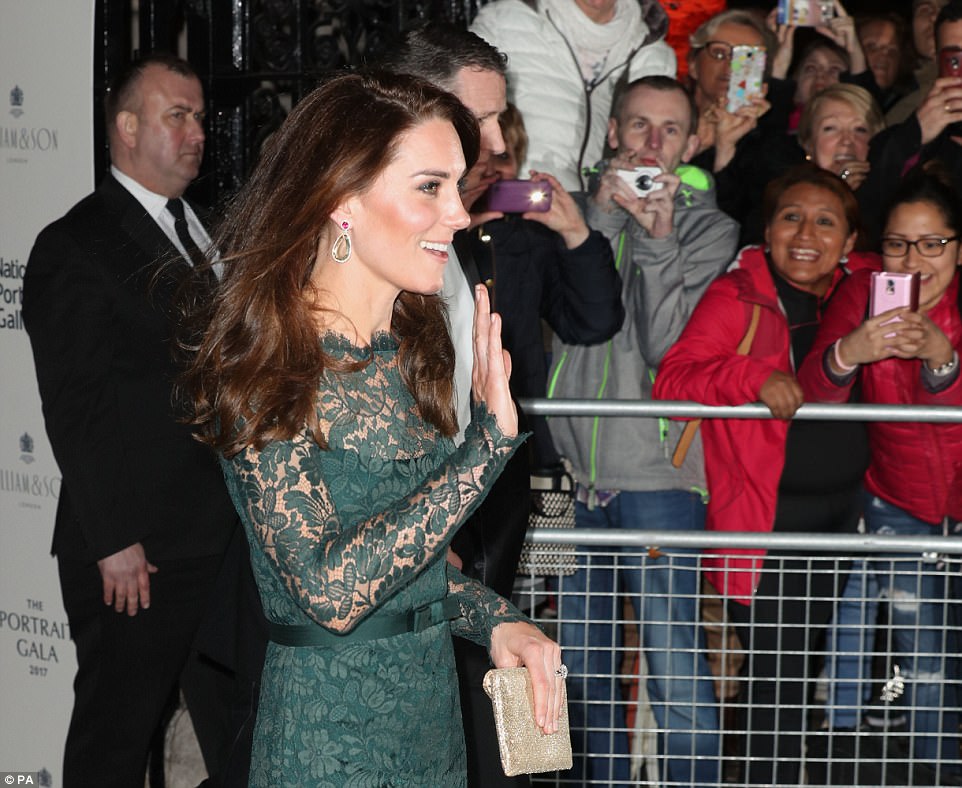 Kate viewed the newest exhibitions and met guests before having dinner at the London art gallery. The Duchess, who has been patron of the gallery since 2012, viewed two exhibitions

The visit is likely to be interpreted as another trip being made by a member of the Royal Family in their role as ‘Brexit Ambassadors’, as they have been dubbed by the press.

The trip will be the Duchess’s second official solo overseas visit, following her successful trip to the Netherlands last October.

Details about the visit have not been released but it is likely Kate will meet members of Luxembourg’s monarchy, probably including the head of state Grand Duke Henri.

The Grand Duke and his wife Grand Duchess Maria Teresa were guests at William and Kate’s wedding in 2011.